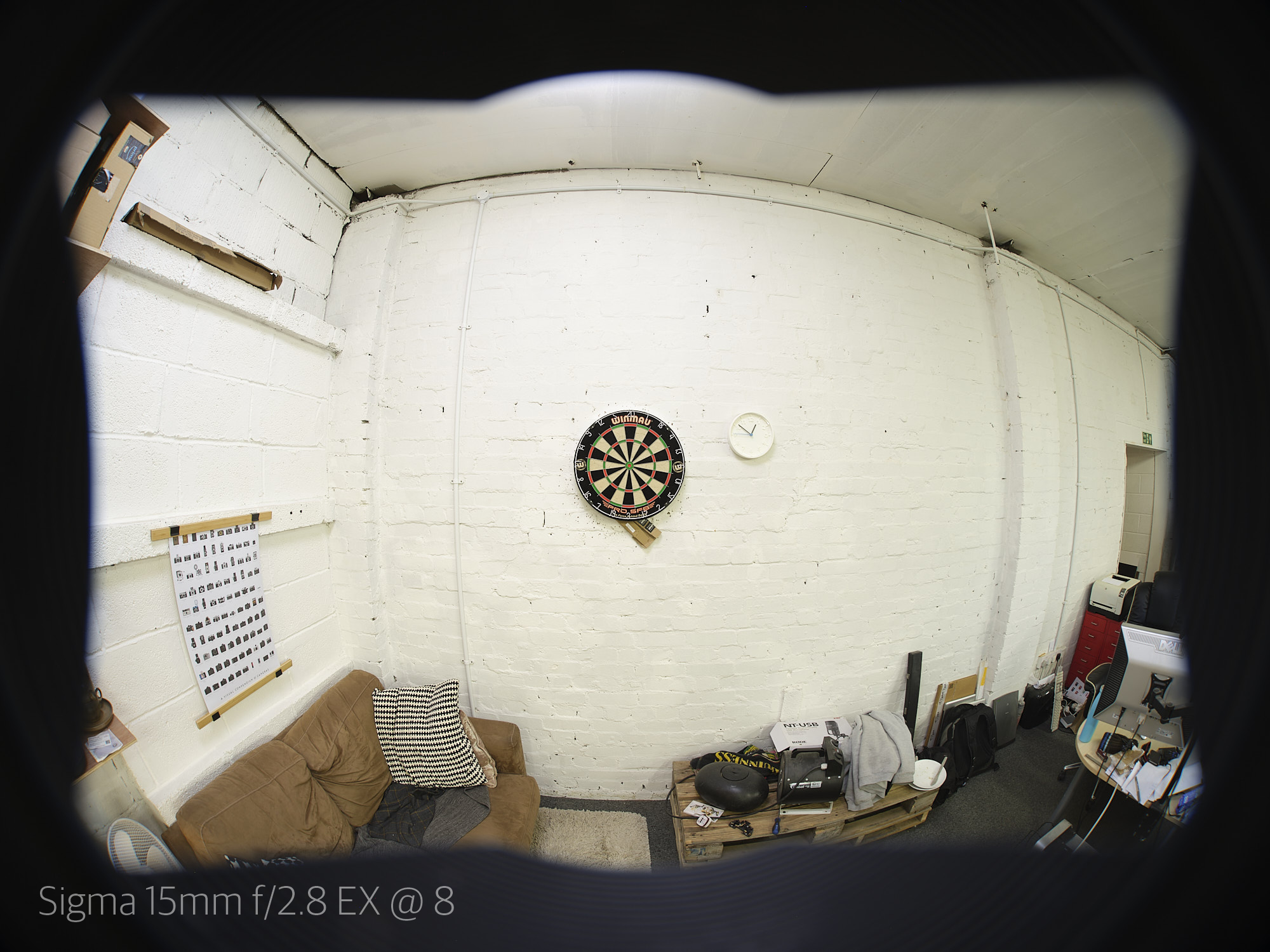 This isn’t a thorough test but it’ll give you a pretty good gauge of what works and what doesn’t. I used each lens wide open and then stopped down a couple of times for a more accurate picture (excuse the pun). All the images are taken in full sensor mode (which isn’t set by default), focused manually and I’m using a Viltrox adapter (but I don’t think a different adapter would produce different results in terms of vignetting). As a rule of thumb zoom lenses vignette badly with some clearly showing the interior of the lens throughout the zoom range. The only Canon lenses that show no sign of additional vignette are the 300mm f/2.8, 28mm f/2.8 and the tilt and shift (TS-E) lenses (as they throw a large image circle to accommodate lens movement). The Sigma primes, as a group, perform well – especially the 85mm and 105mm. Interestingly the Sigma 50mm f/1.4 outperforms both Canon lenses.

Overall autofocus is fine with most of these lenses and the performance so far has been similar to my experience using the lenses on Sony bodies. The 24-70mm f/2.8 L II is slightly erratic but I’ve had similar issues with the same lens on various Sony bodies using the Sigma MC-11 adapter. One point to add is that when testing a Samyang 85mm f/1.4 the lens would not autofocus at all. Similarly when I tried my Samyang 14mm f/2.8 (a fully manual lens) the camera would not fire and returned a lens error – I’m guessing because it detects a lens due to the adapter but is not getting any information back so an error is triggered. I’d be interested to see if this is a common theme among third party EF lenses.

I was impressed with how well the lenses coped on a 50mp larger sensor with nearly all resolving very well. I’ll add 100% crops to the test results at a later date!

So here are some sample images. They were all taken in aperture priority with the camera handling the metering. It’s interesting to see the exposure difference when apertures and focal lengths change. From my experience it’s far better to use the 50s in fully manual mode as I’m often finding that exposure can jump wildly between images in aperture priority. And for the really fast primes it seems that metering wide open quite often results in an image a stop under correct exposure. Once the aperture is stopped down, typically around f/2.8, metering is vastly improved.

Heavy vignetting at 17mm but pretty good from 20mm onwards.

Pretty bad all round, you’d have to crop quite significantly to remove dark areas. There was also a strange phenomenon where the lens kept trying to autofocus once the aperture was stopped down to f/8 or smaller…

Surprisingly good! This is an old lens and I really didn’t have much hope that it would perform well at all but the vignette isn’t too obtrusive and, critically, it’s resolves well despite being an old non-L series lens. The corners of the image are indeed a bit soft and smear but given it’s age (and the fact I bought it for less than £200 second hand) it holds up impressively.

Heavy vignette but usable. The sensor is seeing the edge of the lens so it isn’t recoverable in post.

Certainly usable. There’s a heavy vignette but it’s recoverable in post. AF is poor but that’s a normal characteristic for this lens as it’s the older non-USM system.

Usable right at the longer end of the zoom. At 70mm it’s really heavy vignette, getting worse as you step down.

All good! Slight vignette wide open and a more pronounced vignette when you use the 1.4x and 2x extenders. One point I will add is that I was impressed with the image quality using the 2x extender, which is notoriously soft compared to the 1.4x.

Absolutely fine! Vignette creeps in on the extreme ends of lens shift however.

Like the 45mm above, absolutely fine! Vignette creeps in on the extreme ends of lens shift again.

Comical! But I was interested to see how a very old (probably nearly 20 years old) Sigma lens handled.

Quite heavy darkening which is made slightly acceptable at wide apertures. As you start to stop down you can see the internal housing at the top and bottom of the frames.

There’s vignetting there but actually no more than you’d find on a 35mm sensor and it can be corrected easily in post production. The lens resolves well and is very well balanced.

Images to come on this one but I’ve noticed very little vignetting. Focus is good for portraits (i.e. faces) but I did have issues attempting to focus on a stack of books. It’s a big lens but feels nicely balanced on the 50s, especially with the grip attached. I’ll put this to a proper test soon.

Very much like the 85mm. Works very well with no vignetting. AF is still an issue but increasingly I believe this is an issue with the adapter. The lens is very big but it is manageable, especially with the grip attached.